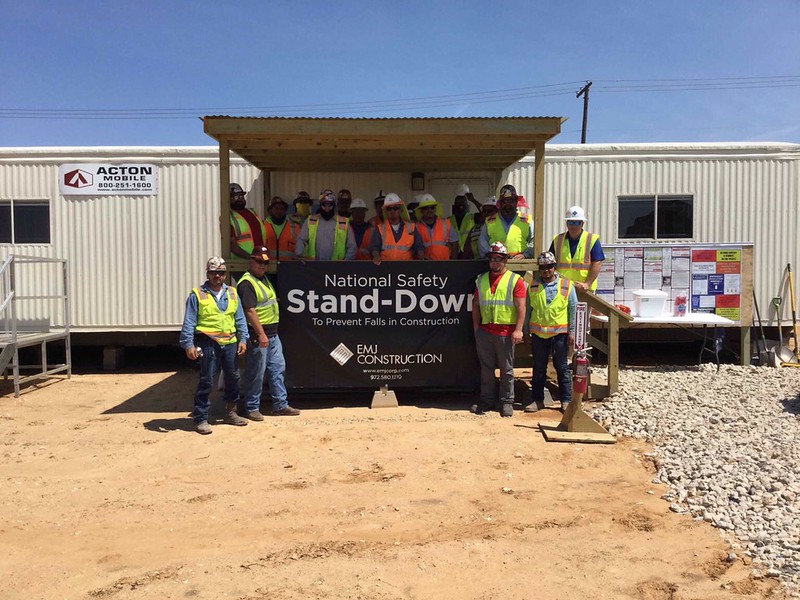 May 7-11, construction teams across the U.S. acknowledged National Safety Stand-Down to Prevent Falls in Construction Week. Founded in 2014, the week was created to draw attention to the high number of falling fatalities in the construction industry—all of which are preventable.
EMJ partnered with CORE Safety Group to encourage our teams to participate in safety stand-downs that week, and as a result, 22 stand-downs were held on job sites across the country with more than 670 trade partners in attendance. Superintendent Rickey Palmer led his team at CarMax in Norman, Okla. in a stand-down on Thursday.

A safety stand-down is an event in which job site leaders gather all employees on the site to discuss safety. Any workplace can hold a stand-down by taking a break to focus on fall hazards and reinforcing the importance of fall prevention. EMJ teams submitted photos of their stand-downs and were entered to win a $150 gift card. The team at The Sheridan at Hobe Sound in Hobe Sound, Fla., had the most attendance at a stand-down with a total of 75 attendees, and the team on the 7-Eleven in Lakeland, Fla., held the most stand-downs.
But, the gift card for the best safety week effort goes to the team at The Village of Fairview, a retail project in Fairview, Texas, for going the extra mile. This team served lunch to their trade partners and invited the local fire department to discuss and demonstrate the rescue procedures when a worker falls and the effects of a worker being suspended in a safety harness after the fall. Superintendent Brian Marston led the Village at Fairview team in Fairview, Texas, in a stand-down.

Many thanks to all of our teams for their commitment to safety excellence! Check out the full gallery of stand-down photos below.